DELTA legal advised CTP on the purchase of a 100% share in RENWON, a company operating a storage and production facility in Chrastava in northern Bohemia near the borders with Germany and Poland.

“This project is a breakthrough for us,” senior associate Veronika Chrobok said. “It is the first time we have used our painstakingly developed in-house automated document generation system in a transaction. It proved to be of great added value, thanks to which the preparation of all contractual documentation, tailored to the needs of the transaction, and its negotiation with the counterparty, was extremely fast and smooth. The talks with the counterparty were substantive, relaxed and professional, and the parties were able to find a balanced solution to the issues in dispute, despite the tight timetable. The speed and success of the transactions is mainly due to the client choosing its projects very carefully in advance and the client’s implementation team responding promptly and constructively to situations as they arise. In the case of long-term clients such as CTP, our knowledge of the client’s preferences also significantly accelerates the transaction process.”

A team led by partner Pavel Fára and senior associate Veronika Chrobok was involved in the preparation and negotiation of the transaction. Other members of the team were Libor Vacek, Jiří Absolon, Henrieta Hovanová and Renata Hurychová. 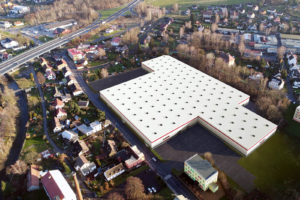 Business Park Chrastava was opened in 2019. The site where the current building now stands was since the end of the 19th century home to a yarn spinning factory, which people later knew under names such as Bytex, Mykana or Bremi. In 2017, the site, which had deteriorated over the years, was demolished and replaced by the current modern park. The present logistics and production centre covers an area of 20,000 m² and is strategically located at the German and Polish borders. For CTP, the park is another addition to its extensive property portfolio.

The CTP Group has long focused on the environmental sustainability of the properties it manages. As the first ever in Central and Eastern Europe, CTP could boast BREEAM In-Use “Excellent” or “Very Good” certification for a portfolio of 292 buildings on approximately 100 sites in six countries as of 1 January 2020. CTP aims to become a carbon neutral company by 2023.

By submitting contact form you agree to subscribe to our Legal newsletter and to the use of your personal data (e-mail) to send it. After you log in, we will send you an e-mail message to verify the availability of your e-mail address, and after receiving confirmation you will be included in the database of Legal newsletter recipients. We will send you Legal newsletters approximately once every month. Your e-mail address is safe with us and we will take care of it as long as you subscribe to the Legal newsletter. You can unsubscribe at any time by sending a request to office@deltalegal.cz or by clicking in the footer of each Legal newsletter. We will remove your personal information from the database after the termination of communication.
This article merely expresses the general opinion of our law firm and is intended only to draw attention to certain aspects of the issues it deals with. It does not constitute advice or a recommendation on any specific matter and the information contained herein cannot be relied upon as legal advice within the meaning of the Act on the Legal Profession, nor as information or advice within the meaning of Section 2950 of the Civil Code. To assess your specific situation, we recommend that you obtain targeted legal advice, whether provided by our law firm or another authorized person. For more information on the services we provide, please contact us. Our attorneys will be pleased to assist you.